A cursory look at this particular Corvette and you would never know that there was anything particularly exotic or meaningful about the special Z06 designation.

But for those in the know, the innocuous alpha-numeric code was actually assigned to a small group of factory-fresh 1963 Corvette coupes that had been specially prepared for racing duty.

It meant that, contrary to corporate policy, Chevrolet would be taking the Corvette to the track to compete with the best cars and drivers from Europe and North America.

The reason for all the hush-hush secrecy was simple. In late 1962, General Motors publicly stated it would reaffirm an earlier policy of non-participation in motorsports. The corporation had suddenly and abruptly decided to enforce an earlier agreement, initialed by the heads of all the domestic manufacturers, that they would not back or support any competitive activities. However, for most automakers, that 1957 accord had lasted only a few minutes longer than it took for the ink on the memo to dry.

For Zora Arkus-Duntov, chief engineer at Corvette and the man responsible for turning what had been a milquetoast two-seater into a snarling V8-powered tiger, the ban made little sense, especially since his fresh-from-the-wheels-up '63 Corvette Sting Ray had just begun to roll off the assembly line. With its shapely fiberglass body and impressive fuel-injected power, the new 'Vette had the potential to be a racer's dream.

In his typical anti-establishment fashion, Arkus-Duntov focused on circumventing GM's red light on racing. Thus the Z06 became a sort of secret weapon quietly released to a core group of professional racers. The remaining coupes - part of a 200-unit quota required to enter production-class events - would later be purchased by various customers around the country.

Although primarily built for competition purposes, to the unsuspecting the Z06 term only indicated a special factory code that automatically triggered the addition of specific parts and the deletion of others.

For starters, the car received the 360-horsepower 327-cubic-inch V8, four-speed manual transmission and a limited-slip (Positraction) rear axle. Upgraded drum brakes with with longer-wearing metallic linings were also part of the package along with heavy-duty front and rear stabilizer bars, stiffer shocks and springs and cast-aluminum knock-off wheels.

Most Z06 versions of the Sting Ray were shipped without heaters, radios and clocks, none of which served a purpose in a race car. Even so, the package of special racing goodies that came with the car boosted its $4,257 base price by an extra $1,800.

For its inaugural outing at a three-hour event held at Riverside, Calif., in October of 1962, Arkus-Duntov and his crew quietly prepared four Z06s. Three of the cars were actually driven from the Corvette factory while the fourth car was shipped by trailer.

The race would not be an attention-getting world-class event (which might have blown Arkus-Duntov's cover) such as those held at Sebring, Fla., the Bahamas and the world famous 24-hours of Le Mans (France). It would, though, turn into a special occasion since three Ford-sponsored AC Cobra roadsters developed by the legendary Carroll Shelby would also make their initial appearance in a real race.

Although both the Ford V8-powered Cobras and Chevy Corvettes suffered a number of mechanical failures, a Z06 entered by hot-rodder/race-car designer Mickey Thompson managed to win.

Amazingly, the Z06 managed to take the checkered flag at its first-ever event, something that rarely happens, even in this day and age, to a brand new model fresh out of the crate. However, it was one of the few times the car ever made it to victory lane, especially when up against the heavy hand and considerable cash outlay expended by Ford to ensure its Cobra sponsorship paid off.

In response, and with some encouragement from his superiors, in 1963 Arkus-Duntov began to develop a more potent Corvette that could compete in the GT Prototype class and his interest in the Z06 came to an end. Fortunately, many of the special-duty parts that went into the car remained available for Sting Ray buyers wanting to try their hand on the track.

Today, the Z06 brand indicates a very special and very fast Corvette that more than pays homage to both Zora Arkus-Duntov and his secretive Sting Ray.

Malcolm Gunn is a feature writer with Wheelbase Media. He can be reached on the Web at www.shiftweekly.com by clicking the contact link. Wheelbase supplies automotive news and features to newspapers across North America. 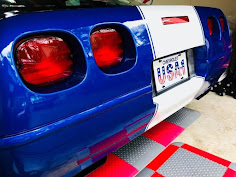